Should I compare data year-over-year?

The data estimates are from the Census Bureau’s American Community Survey. To produce these estimates, the ACS combines data across time periods. The ACS’s ongoing survey collects data all year round to produce 1-year estimates, and over 5 years to create the 5-year estimates. These estimates represent the characteristics over an entire data collection period. 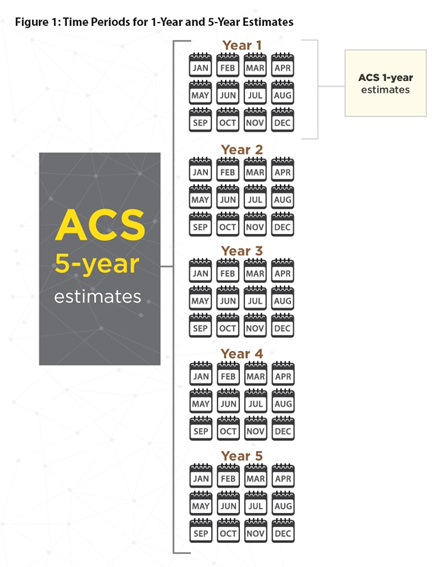 The difference between the 2019 ACS and the 2020 ACS datasets is largely driven by the differences between dropping off 2015 and adding 2020.

Comparing overlapping data does not measure what you may be seeking. The difference between overlapping estimates is essentially measuring the difference between the nonoverlapping portions.
For example, comparing the 2019 5-year ACS to the 2020 5-year ACS does not measure the change between 2019 and 2020, which is what you may be interested in knowing. Since the 5-year data represent a longer timeline, they are not likely to capture abrupt changes.

The good news is that there won't be a lot of change between 2019 data and 2020 data, because the estimates are based on 4 of the same survey years and only have 1 unique survey year. Most of our clients wait 2 to 3 years before buying a more current dataset. The only clients who get year over year updates are those clients, who for marketing purposes, have to be able to say "we are using the most current US Census data." So marketing drives the data update decision rather than changes in statistics for these clients.

Did this answer your question? Thanks for the feedback There was a problem submitting your feedback. Please try again later.
Last updated on October 13, 2022